7 Quick Takes - From the weekend of M's birth

This is not M's official birth story but it will be pretty darn close... Enjoy!

On Halloween I had another (final) dr appt and I dragged Lee along. I had an ultrasound and a stress test for the baby - I had it with E too but this time the baby was a jumping bean which was good. My doctor (at the practice there are 4 doctors and you do NOT see all of them - you see your doctor and you get what you get at the hospital - which is perfectly fine with me) was on call the first weekend of November. Great. He's never delivered one of my babies nor did I really want to roll the dice and get the doctor who delivered E. 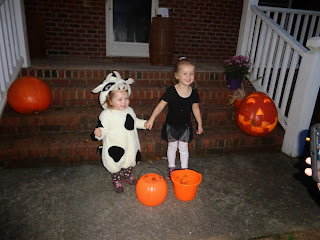 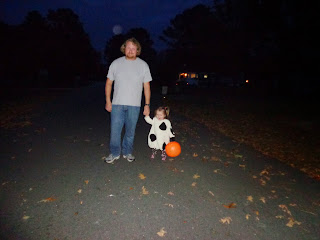 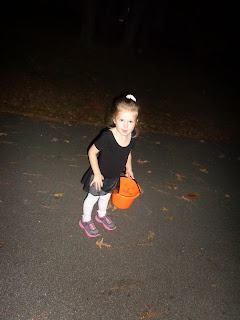 He gave us the pros and cons of induction - I was 0/0 that day too so nothing seemed to be happening naturally. I was pretty much terrified of Pitocin because I did not want my labor to get out of control to the point that I would need/want an epidural. Stadol - fine. Epidural - not in my birth plan. The doctor was willing to let me go to 41.5 weeks but said Sunday (11/3) I would be 41 weeks and he could induce me then. It was entirely my/our decision I just needed to call and make the induction appointment for Sunday or come back to the office in 5 days. Seriously there was not pressure to do one or the other - which I appreciated.

After some short soul searching, I very reluctantly called to make my appointment for a Sunday induction... But not without a few tricks up my sleeve to get this labor party started...

So with my challenge in hand/mind/heart, I set out to beat the clock and go into labor before Sunday morning at 6 am. I had written off going trick or treating with the girls because I was going to be super pregnant or with a new baby. Since it did not seem like I could walk enough, Papa and I took the girls out in our neighborhood. I carried R on my shoulders a few times to try and put some extra weight on the baby (that's not really why I did it but it sounds reasonable, right?). That was Thursday.

Friday I tried to get everything organized at work - morning and afternoon. With the AC broken (it was warm that day) I left sweating feeling like I had run a race and finished up as much as reasonably possible. Came home to anniversary dinner with Lee. He made an eggplant and goat cheese tapa which was really good followed by some chocolate cake - anyone heard eating eggplant can induce labor? Probably alot more needed than I ate that night.

Saturday... oh Saturday. I had also been told pineapple juice could induce labor so I had my 46 oz can popped and ready before breakfast. I drank half before setting out on my EPIC pre-labor walk. My goal - to walk 2 hours. I figured I had walked 90 minutes the weekend before E was born so why not shoot for 2 hours. Induction was a short 24 hours away. Well 6.5 miles and a good long conversation with Nani later - I had walked 2 hours and my feet hurt. And I was not in labor.

So with swollen feet and two girls who wanted to play outside Lee and I sat on the porch and watched them as I drank the remainder of my pineapple juice. After naps we headed to church - in the Mount. Fortunately there is a whole basement dedicated to loud noisy kids. Mass is streamed on a projector screen so R banged on the metal chairs (whose idea was that to put the noisiest chairs possible where kids are going to be banshee children?). R was way confused when she heard Papa's voice proclaiming the Gospel and for the prayers of the faithful (he was on deacon duty). E hung out with Jibbe and generally had good behavior.

After Mass we stayed and talked to the priest who said something along the lines of - "Tomorrow's an exciting day" to which my response was "Yes... kinda. Minus that whole going through labor thing." Lee was talking to a bunch of people too so I ended up talking to the woman who was down in the cry room with me and R. She said to try Castor oil to get labor going and that several of her 8 kids were born with the help of Castor oil.

Well one of my biggest fears about this labor was going into labor at night and having to call and wait on Jibbe to get here... So I succumbed to my fate of induction the following morning... Not without a good 30 minute pump action before we left.

--- 3 ---
Fast forward to the hospital... I was the only induction for the morning. I was surprised that my doctor actually would induce me on a Sunday. Anyways. I got checked in and the nurses asked me 50 million questions - some of them twice or three times. Finally at 7 they started the IV with Pitocin and I was 3 cm / 80%. I wanted to walk around but not possible because I was on Pitocin? Grrrr.... So bedridden and induced. NOT what I wanted.

Nothing much to report for 3 hours until my doctor came. I was 4 and some percentage. I was super bummed to be only 4 after 3 hours of this crazy Pitocin. I was almost ready for some Stadol because the contractions were still manageable but I wanted to wait until I was 6-ish. That's around the time I got it with E and R - and had two doses before they were born.

My doctor broke my water around 10 am.... then things got a little crazy.

--- 4 ---
I ended up getting the Stadol when he broke my water which was a really good idea because things got intense. The Stadol made me care a bit less but that drug does not effect any pain levels. Lee started reading through the Psalms so I could focus on something other than the contractions.

After some time of contractions I called the nurse who checked me and I was 8 - I think this was about 10:45. I specifically remember asking her to not leave the room - even though Lee was there - she had to go out and get the scale and stuff so everything would be set for the baby.

I asked her if I could start pushing and she said I couldn't because my doctor was on his way back to the hospital. FANTASTIC. You break my water and then peace the heck out? Well... I was not actually thinking that. They were telling me to focus on not pushing... Yeah good luck. That lasted all of three or four contractions.

FINALLY my doctor came back and was suited up and ready for the delivery action. I pushed a few times - honestly probably not more than 5-10 contraction cycles and baby M was born at 11:09 am. It was such a relief to finally deliver the baby. I did not want to hold her immediately because I was so darn thristy. You know all they give you is ice chips. On top of that I had not had anything to eat or drink since 9:30 the night before PLUS it was daylight savings so tack on an extra hour AND add the intense breath-through-labor breathes... I just wanted some water. No luck. I was begging... Just ice chips until everything was cleaned up.

My doctor looked at me and said "Look at your baby" to which I said I can't because I need some water. Looking back it seems weird. So desperate for water. I never really have this overly emotional attachment to my babies at first sight. I mean really... getting them out is a ton of work and not to mention painful. I do think that some of my response was due to the Stadol. That stays in your system for 2 hours and I was still working through the second hour of the dose.

Lee held her first - just like that country song that makes me cry... and now you can too {READ IT!}

With an unparched mouth I was ready to hold our sweet baby girl. So little M was finally here... With a semi-cleared head I started to wrap my mind around another little girl. She nursed awhile in the L&D room. Lee called and texted necessary parties. I texted people but I was not really up for talking.

Lee went and made a CookOut lunch run with the traditional Mint Oreo milkshake victory shake.

M stayed with us for the entire afternoon. Much different than E and R who were whisked to the nursery an hour after birth. {Hospital policy change that I found out about and it was pretty great}

We talked about L&D and watched football - yes I approved. We talked about how I was super glad that it went so quickly and how there were 3 other women in labor at 7 am and none of them had come out yet - I asked the nurses.

We talked about how M does not look like E or R. M has the blondest, smallest eyelashes and a tiny bit of hair in the back - unlike E and R who had heads full of hair. She is a keeper : )

E and R were both skeptical. E did not want to hold M which was fine. R wanted her snack... shocker. Jibbe, Papa, E and R trekked to the gift shop to get something for new baby and then it was off to the normal nighttime routine for them.

Then it was M and I for the night. She was fine. The hospital beds are the pits. I got in a good walk that morning during the shift change and M was in the nursery and not screaming so I was fine with that. It was nice to have some time to reflect on the other day and peek in the nursery window and see the 7 babies in there.

During the shift change the nurses and doctors were talking about their patients and I heard seizures, spina bifida and E.coli all come up. At that point I realized how special life is and how easy it is to take good health for granted.

After the shift change, M resurfaced hungry as expected. My hospital has a lactation consultant who is awesome - and if your hospital or birthing center does not have one you are totally missing out! So she was there to help M and I get organized in the feeding department. I have to keep telling myself, okay I have done this for 18 months... M has been doing this for 18 hours. It is easy to forget the details of breastfeeding that make it easier for mama and baby.


Lee came with breakfast. The woman came to get all the name info. We paid our {insanely expensive} bill and we were wheeled out.
For more Quick Takes, visit Conversion Diary!