No school on Tuesday because of the threat of snow + no school W,R,F because there actually is/was school =

Alrighty now… Let's just get this lengthy-ish QT out of the bag. How about R has made some decent potty successes this week. Sweeeeeeeeet. Almost to the point where I think I could put here in undies and take her to the potty every hour and she'd do relatively well. BUT… I haven't because I'm a slacker mom. However I am motivated because she could get to the point where it is too convenient to just go in the diaper and then not want to go potty. The bribery with Smarties is working well so I have to step it up here.

Now to the meaty stuff. If you remember last week it snowed and the girls were not too thrilled about the glove situation. So I attempted to remedy it for this week's snowstorm of the century {okay not really} by ordering from Amazon at the very last second and paid for next day shipping and bam…. Gloves were here in time 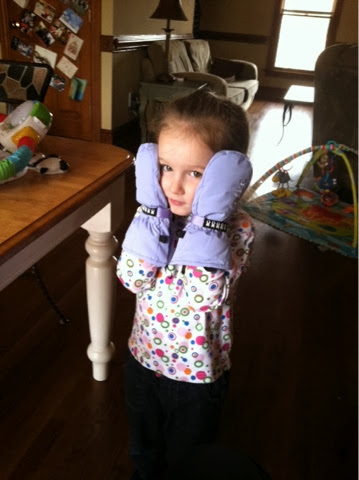 Now if I had only realized that snow bibs and snow boots are majorly on sale at Lands End I think we could have spent hours outside in the snow once it finally got here. Thanks weather folks for making us wait until 6 pm for the snow when you PROMISED it 5 hours prior!

So off to the races outside. I can handle being outside with the girls BUT the getting dressed so you are not freezing your fanny off is a horse of a different tail. Once we were finally dressed and ready on, Wednesday we took one pic with all the girls and M and I hunkered down for a snack while Papa took the big girls out.


Well as soon as M was done I hear a BANG BANG BANG BANG BANG on the mudroom door {love you mudroom}. Everyone is piling back inside. Are you kidding me? I was actually looking forward to riding the girls on the sled and at least walking up the street. Negative.

E's nose was running.
R was, well, being R
Papa CLAIMED the sled was broken and he could not pull them both around on it at the same time. SO not true. {yeah I just called you out}

I took the girls out on Thursday and the sled is perfectly great and ran them down one street that people had not completely obliterated with 4 wheelers and golf carts. Sledding experience - CHECK!


Lee made up for the micro-sized outside time by making the following for dinner:


What is snow cream? I have been asked this twice in the past 24 hours. Please go make it.

So So So glad my hubby ENJOYS cooking and occupying his time during the bedtime/pajama getting on/teeth brushing nightly saga cleaning up. Sometimes I think I'd rather clean up the kitchen some night. Picking out pajamas is a whole to-do that usually involves E picking out what she wants to wear and then R getting hers out after her change and E trying to convince R to wear something that matches E and finally because a 2 yr old cannot be reasoned with… E changes her pajamas to match R. Yeah. Its that complicated.

E - Alright now… hold hands. Get you hands together there

Okay now your done with your wedding

Since E's nose was running like crazy we had her rest on the couch rather than our bed to halt the spreading of GERMS!

Yes you are reading that correctly. Minus 4 in Rocky Mount. The time is an hour ahead but Lee's crazy complex weather machine is quite trustworthy so I am inclined to believe it. 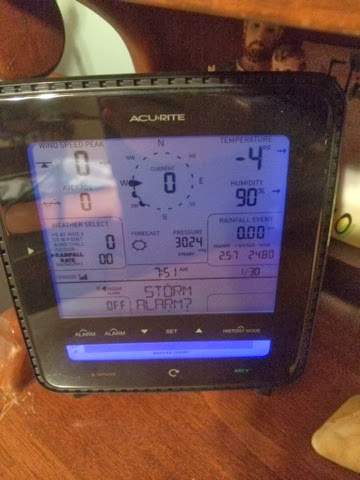 After this week of being inside with the girls I have learned a few things.

A. I don't think I'm cut out to be a full time stay at home, homeschool mama {but I've been wrong before}
B. Thank goodness for PBS
C. I am glad we have an action packed month of busy weekends
D. I cannot believe we are celebrating R's second birthday this weekend {mind blown}
E. So so so VERY ready for some spring time