Cycling Queen and other outdoor activities

E got a tricycle for Christmas and she loves riding it - and now that we live in a neighborhood she has space to ride. E is still trying to figure out the pedals but she can still go the distance just scooting along.

Also last week we had some nice weather so we spent several afternoons outside. E also likes finding rocks and playing ball. However Jibbe and I discovered that E does not like the weeds in the grass that stop her ball from rolling. The best part about the weed situation is listening and watching E say weeds. She puts so much emphasis on the ee sound that she whole face scrunches up! It is awesome. The not so awesome part is that she decided the weeds needed to be picked but then refused to touch them.

Got any good weed killer that is safe around kids? 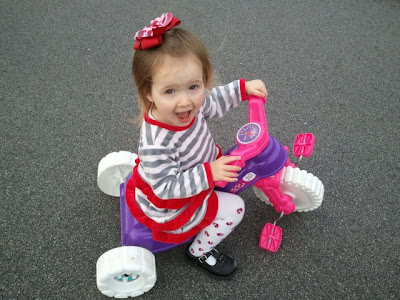 Email ThisBlogThis!Share to TwitterShare to FacebookShare to Pinterest
Labels: outside with the kiddos, wisdom of a toddler