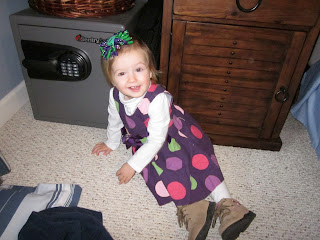 So I cannot believe it is that time of the month when I have to give an update on non-so-little E! It is crazy that she is 20 months old!!! So here goes...

E got to have some special time with Papa in December because MMO was closed for 2 weeks. She helped him start packing with the 'stickies' and was a very good 'helpies' with the 'stickies' but she would put her pieces on the already taped up boxes. I don't think that she has a clue why everything is packed up but she does not seem to be bothered by it. She has visited the new house once but without our things in it she does not understand why we were there.

E had a super great Christmas season. She enjoyed Christmas day with my parents, the next day with all 6 cousins and rounded it off with the 14th day of Christmas (because Mama and Papa were not on the ball) with stockings - more to come on the 12th Day of Christmas! She has only managed to break one of her new toys - a stroller -but fear not, she got 2. I have noticed that she had very little interest in her box of toys. Even some of the new things. Some days she will dump the box and play and other days could care less about playing with the toys. She loves her flower pots which she sticks on her head - and those would not even be there if I did not get Lee the wrong thing at Wally-world. 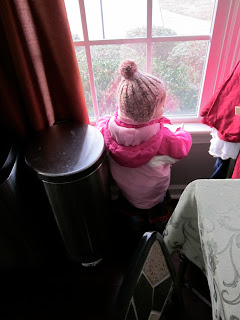 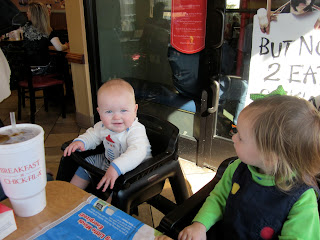 She remains highly interested in Mama and Papa things. In particular my shoes. Lee said she played in our closet with my shoes one afternoon for at least 20 minutes. I am trying to teach her about matching shoes and matching shoes and outfits - which is just comical. She loves picking out her shoes. Her black ones are her favorite and demanded them for church on Sunday. She still does not really care about the clothes she wear though she like to have on 'skirts' and 'po-kay-pots' (polka-dots). E is FINALLY wearing bows for more than 2.5 seconds which is excellent because her hair is getting pretty long.

E loves to have a book in her hand. She has to have several books in bed with her at night night time too. We have resorted to only the cardboard books because she is still quite abusive to the books and then gets upset when they are 'broken'. She got 4 toothbrushes in her 'stockin' and for whatever reason has decided she has to take a toothbrush to bed too??? I have no idea but its not worth the fight so Lee and I have caved the last few nights. 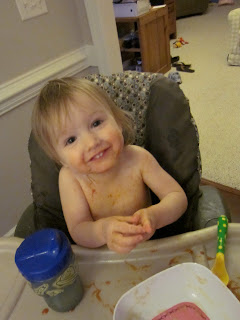 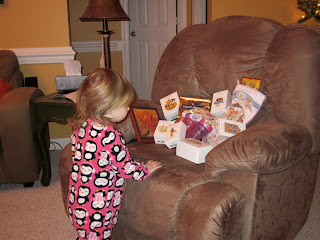 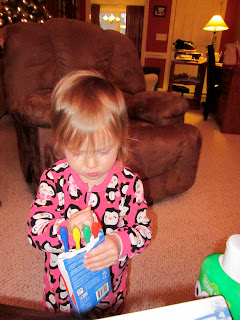 E can articulate what she wants/needs and is learning to use please and thank you. I think I would go insane if there was not some form of thanks for tending to her every need. I probably did not tell my parents thank you enough growing up! She loves count and know numbers 1-10 but usually cannot start on one and make it all the way to ten - seven is a bit confusing for whatever reason. We sing ABCs quite often. My favorite part and we get to 'W' and I pause for her to insert the letter and she shouts out 'doubles'. Let's see. We are trying to teach E her name. She cannot get it out yet though we have started spelling it for her. She knows it has an E, Z,A, and H in it - not only that she loves to shout out H while we are spelling it.
Finally her most recent accomplishment was saying 'Al-lay-lu-la' at church this past Sunday after it had been sung and it was quiet. It was INSANELY cute/awesome/whatever and the other 40ish people who were there totally appreciated it. E its