Back in December we loaded up and with a few handy hands Hurricane Kibbe made landfall in the DR - Punta Cana to be more precise. Lee and I debated and debated about going on this trip... Could we handle 2 little kids in the airports, on the planes, security, hotels, sleeping away from our beds, pools, ocean... you name it - it was probably discussed. I am not going to go too much into the logistics of the trip - I'll save that for another post. Now I just want to focus on the memories that we made - and while difficult - the family trip was totally worth it.


We were set to leave on Monday morning. The plan was that we would go to church Sunday spend the afternoon and night at my parents and go to the airport. Well a major wrench was thrown in that when 1 am Sunday we here the cough cough over the monitor. Not the sore throat cough but the I'm about to get sick to my stomach cough. 3 hours later and 4 trips to the bathroom later, and 2 rounds of carpet cleaning later and 1 set of sheets later E is frazzled but back in bed asleep. Okay food maybe or was it the flu?

Sunday plans are scratched and Lee goes to church while I stay with the girlies. No food or anything in the house my mother in law comes to the rescue - she is the best - yes I know this I have been told many times and I don't forget it either! Well then I start feeling queasy. AWESOME. I call Lee tell him to get home ASAP. Put Sesame Street on - which I NEVER do - get R back for a rest and I lounge with E until Papa gets home. I spend the afternoon between the bed and the toilet and around 4 or 5 Lee asks - "So are we going on this trip" You know the trip that I have been planning for weeks for, that we went through heck to get passports for, that I have been packing for days for, that I ordered special rolly carseat adapters for, that we got premixed formula so we would not have to worry about the water for... YEAH THAT TRIP.

All of this is going through my mind along with what did I eat to deserve this - on the day before we are leaving. I tell him we'll play it by ear but to prepare to go. He has to do the last pack and got to the store for the last items. By 9 I am feeling slightly better but I still have my doubts. Well 3:30 am is quite early and we pack everyone in the van and are off by 4:15 - I am feeling way better and Lee and R never got anything so I am guessing the insane illness is from food. I did not want to travel with a sick child(ren).

We get all checked in and meet Jibbe and her sister - Aunt Mary who were the two brave souls to go on this adventure. E is excited about the plane ride but is still not feeling 100%. R is just her normal laid back self. We load up on the first flight - only this is that the rollers that we got for the carseats go easily through 1st class and not at all through coach so that was really my only complaint. My biggest fear is we'll be the one with the screaming kids and bother everyone. Much to my delight and surprise E and R are both pretty quiet and seem unphased by the change in altitude. Score. Get to ATL - roll into the Delta SkyClub room where I feel slightly less disgusted at the thought of R crawling on the floor. Hop on the next plane and right as we start taxi-ing E announced she needs to use the potty. Well we learned our lesson and put her in Pull ups the next time but we did have a full change of outfit for situations like that. E and R slept on the flight. R slept in Aunt Mary's arms which I am kinda jealous of because she NEVER does it for me!


We get to Punta Cana and taxi it to the hotel. Check in. And finally have 2.5 secs to think and its time for dinner. We of course cut out early of that which was fine. I thought R might sleep in the stroller but no. We get sleep arrangements set. R in the pack in play in the kitchen area and E on the mattress from the pull out couch. Could not have planned it better.

Tuesday was our first day at the beach. We did the whole breakfast thing first and the breakfast variety was quite impressive. E loved it. She god French Toast a few days and R liked the Crispx cereal. Then it was beach/pool time. It was super windy so the beach was not the best of options. E loved the sand. R well was just taking it all in. The water in the pool was quite cold so I only put R in her bathing suit one day : ( E was skeptical of the pool and went in a few times but preferred the baby pool - which had no seats around it!


Wednesday we lounged around the pool and waited for Papa to feel a bit better which he did by lunch time. Same pool/beach/lunch/nap deal. Taking those two hours in the afternoon were crucial. That was the day our room did not get cleaned until 6! It was also the day we were doing Vespers for St. Nicholas while they cleaned our room - that was on for the books. Then we left out our things - some of them for St. Nicholas and headed to dinner at the Japanese steak house. It was fine - just a reminder that restaurants and later dinners and kids don't always work the best well. St. Nicholas had not come once we got back so we hurried the girls to bed.

St. Nicholas managed to find us in the DR by Thursday morning though! E was excited R was happy for her treats. St. Nicholas took the toys that the girls left him and brought clothes, books and candy - E was thrilled for the candy. Mama and Papa stuff did not fit in the suitcase... E was oblivious to the fact nothing was left for us which was excellent. 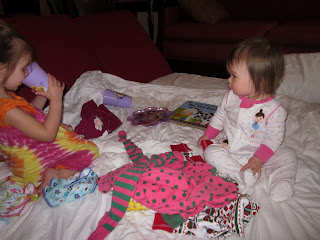 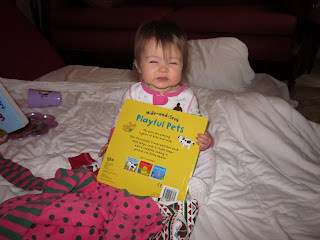 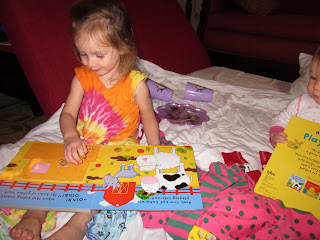 Thursday was another beach day. I forgot to mention we let E get her toenails painted the day we arrived. She was so happy and told everyone at school about it when she got back! R put her foot in the ocean and she and E played in the sand. The wind there was pretty insane. After rest a trip to see the flamingos it was time for dinner. Except we waited and waited and waited for dinner. Fortunately we were not the only insane ones to tote little kids so R met a few friends while we waited. Then it was back to the room to repeat the craziness of Monday's airport antics.


We had a later flight Friday but it was crazy windy so we did not let E in the pool or sand - we spent some quality time with the flamingos and took a little walk. Finally we packed up and headed to the airport. The airport was insanely slow - it was horrible. I won't go into too many details. We got lunch and waited for the plane. The funny thing is down there you have to walk on the tarmac to get to the plane and walk up stairs - not the best case scenario with our little rollers but a small price to pay. I was 80% we were going to miss our connection in ATL. Lee was 100% ready to drive home in a Suburban. Fortunately customs and immigration was fast and we got to go through children/wheelchair line. We made it to the gate with about 10 minutes to spare.


R was rearing for a meltdown and we were definitely the ones on that flight who had a screaming baby for 75% of the flight - of course she fell asleep as we were landing but whatever. Before we took off the gate attendant made me turn her to forward facing - clearly she is not well versed in carseat safety but I was not up for the fight. Maybe that got R mad or maybe it was because she had to wait for her cup because the flight attendants filled her cup with boiling water and we could not get an ice cube for 20 minutes... yeah I think that was it.

Well we claimed our luggage while Lee got the van. Getting the carseats back in the car with two tired kids in the semi-dark car on the sidewalk of an airport is no easy task - but we got it. Finally back on the road home to the Mount. We stopped and got a chocolate milkshake from McD's because heck we deserved it for all that work! Pulling into the driveway felt familiar. We rushed the girls to their rooms. Turned up the heat and I think Lee unloaded most of the car. We had to put sheets on the bed because I could not bear the same sheets from Sunday night. Then it hit us... True rest and relaxation and peace and quiet for 6 hours until 6:30 rolled around and I had to get laundry started and go to the grocery store for the essentials.