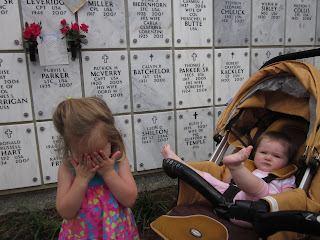 Errr so this is topic that no one ever talks about but since I went to a funeral today I just have alot thoughts going through my mind...

1. I remember going to my first funeral. It was for someone's dad who died of cancer. It really puts your life into perspective went you consider cancer or a car accident ends a loved ones life sooner than anticipated

2. I remember going to a funeral for someone who killed a parent and then committed suicide. That was a crazy funeral. Thinking that someone could be so angry and out of their mind that they would kill a parent is simply not fathomable.

3. When my brother in I were in Guatemala we found out that our grandpa died. That was really hard being away from our parents so we really relied on each other and the group we were with to process death. I think that is something that funeral facilitate... processing death. Processing death is not easy -even if you are expecting it - especially alone so funeral allow people to gather together and support those who need it and share in the good memories of that person. I really learned that from being Guatemala - though we did not go to our grandpa's funeral - we processed his death with our group -which helped alot.

4. I went to Lee's grandma's funeral. She lived to be in her mid-90s. Funerals like that and the one I went to today remind me it is a blessing to not suffer in death because there are many people who suffer when they die. Families and friends were able to say their good-byes and the people who died likely knew it was happening so they were hopefully able to be at peace.

5. My grandparents were entombed at Arlington National Cemetery - wow that was a site to see. Yes it was sad at the church but the whole military funeral was simply spectacular. It was really an amazing experience and one that I certainly will not forget

6. There is one funeral I have been to that absolutely changed my outlook on life. Going to a funeral for a child is something unlike anything I have ever experienced - and as a parent is just - well there are no words. No parent should have to bury their child - the words of my mom really hit home then.

7. Burying the dead is a corporal work of mercy and it is certainly not an easy one. I don't know anyone who likes to see others cry - it is hard and at times uncomfortable. BUT... I think that if you put yourself in the other's shoes you would want the love and support to get through a sad time. Whether it is going to the hospital before someone dies, calling to see how everyone is doing, going to a funeral, sending a meal, or checking in a few days or weeks or months later - anything to help that people process the death of a loved one.

8. I'll close on this because once the funeral is over and the visitors have returned home life goes on as it did before this person died but I imagine you are stuck trying to make sense of it. However you end up processing death you will never forget. One way that our family does not forget is going to pray at the grave of our family who have died. We certainly could and should do it more but I think that it is a great habit to get into and get the kids into. Of course we commemorate those who have died on Sundays during Liturgy but there is nothing like going to the grave and remembering that person - it is just different. 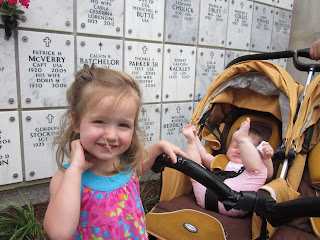 I'll blog about something not as heavy next time but let's be real... life is heavy sometimes : )