It is Friday again???!!! Sweet. So less stressed this week than last week. Very glad to be spending the weekend at home with the girls. Though I hope I can be a cleaning machine like I was last Saturday. Got the bathrooms cleaned and two loads of wash done before 7 am. Yeah it was pretty impressive.

--- 2 ---
R has been more apt to stand up while holding on to a chair or table. She is still not pulling herself all the way but she is super interested.

--- 3 ---
Okay so how about E has been bucking her naps for the past week or so. She will have quiet time and read and play and sing and do everything except nap. Well yesterday she napped for 2 hours probably. We did not put her to bed until 7:30 instead of 6:45-7 on non nap days. She was much more pleasant and did not fight going to sleep as much. She was calmer. Sleep begets sleep. Yeah I think so


--- 4 ---
Found out this week - well maybe last week but last week was a blur - that there will be 5 day 3 yr old class at school!!! Thank you thank you thank you!!!! No more "Is it my 2 yr old class day" and then a disappointed E realizes that she is not going to class but MMO. Not that she does not like MMO but I think she craves the structure and activities. Needless to say I am thrilled and so are some other mamas. E was not even the first on signed up!


--- 5 ---
Activity central - Papa and I decided it would be good to get the girls in the pool again. So we are back to the YMCA for parent-tot swim lessons in February... Well I have not signed up yet but it is definitely on the to do list. Also, I need to get E's soccer registration form in before the end of the month to get half price discount! I am super excited for her. I remember playing on the Blackberries when I was super small and we lost every single game - even though you are not supposed to keep score : )


--- 6 ---
How about R's b-day party. I think we are going to try and have it at Jibbe's house so that she can come. Jibbe just got her knee replaced this week. We'll probably play it by ear and see how Jibbe is feeling. I think it is so great that the girls get to have their grandparents so close! Along the birthday line, E said that we need to give R a Christmas card for her birthday. Also, I am hoping to take E out soon to get R's birthday present. E does not really get it but R always plays with E's babies so I think we'll get R a baby (and I think her cousins are getting her one too but R LOVES her babies). We will definitely go with a Corolle baby. If you have a girl or have to get a gift for a girl these babies are the best. Softest and their faces smell like vanilla instead of plastic. Don't believe me, just check them out. 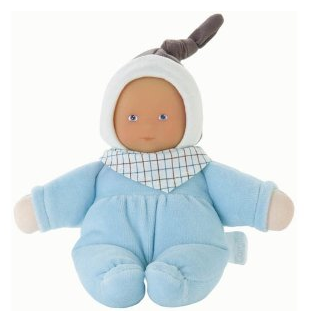 --- 7 ---
So in NC there is going to be some interesting weather and it is all the buzz this morning. Schools closing early... the works. Eight year ago something similar happened except the schools did not close until too late and kids slept at school and people were stranded. Uncle Kevin walked home and did not get home until 8-9 pm. Well I was at UNC already so I did not really feel the full effect. It is just interesting because about two weeks after that winter event, I went to my first Eastern Catholic Church service and met this blonde haired blue eyed guy and a few of his friends. Yes I met Lee almost 8 years ago. It is so crazy the circumstances for us meeting - which would take forever to explain. Never in my wildest dreams 8 years ago did I think I would date Mr. Lee nor was I particularly interested but I guess someone bigger than both of us had other plans. Isn't it funny how the Holy Spirit works : )