7QTs - This post is brought to you by... 3 yr olds and all the ridiculous antics I can fit into one post

Yesterday morning E was not being a super cooperative 3 yr old. Have you met any? Specifically in regards to getting dressed - by herself - which she can do. Nothing matched. She wanted to wear a jumper like R. Then she had to wear a sweater but she did not have any clean jeans and then it was back to the jumper but the purple tights did not match the pink jumper and then the jumper did not have white in it so it did not match the jumper ei-der and then the white shirt did not fit because it was too small. All in a span of hmmm... 3 minutes. I sent her off to the brown chair to pout in her fashion woes by herself.

--- 2 ---
We managed to leave the house at the time we were supposed to be at school. The dishwasher was not loaded - no surprise. My bed was not made - shocker. The girls room had blankets and animals everywhere - did I mention we're doing a pre-Christmas purge? And to top it off the darn humidifier that we got for the girls room is not working! Oh and I'm 39.5 weeks pregnant.

So instead of focusing on the morning and how I should have been making the bed and loading the dishwasher before the girls got up - instead of loading pics for this post. I'll make a mental note of better decisions I can make and remember E is 3.

Along with the other silly 3 yr olds on her soccer team. While we are forgetting recording for memories sake about soccer how about Monday was picture day and E REFUSED to take an individual pic or be in the team pic. I am seriously going to call the photo people and see if I can get a copy of the pic of me holding her in the pic and her screaming. It would totally be worth the $10 bucks, right? I think so! Side note: And if you think she got her juice box and snack at the end of the game... think again.


--- 4 ---
Moving forward to the game portion of the evening... E was very mad that we were not on our usual field and had to be on the one right next to it. Sometimes I do think she is mildly OCD.

I told her before the game at home, if she scored a goal we would go get ice cream. I am no stranger to bribes... How do you think we got through potty training?!?!?! So this idea movitated her to be out on the field longer than normal and actually kick the ball a few times. But as soon as the other team came up she would have nothing to do with the ball. {There was one girl on the other team who was a ROCKSTAR and probably scored at least 7 goals}. Now that was impressive. But as the game went on... she stayed out there but then would not kick the ball at all. She had a half way open lane to the goal and I put the ball in front of her and said one, two, three kick it. Its your turn. I got a resounding no. No. No. On

--- 5 ---
Oh but the Caterpillars... we were doomed from the start because of our mascot right? Ehhh... I have no idea really but at one point I think I was standing out on the field after the other team scored a goal and there was only one lonely Caterpillar out there with me {there's supposed to be 4 players on the field}. It was just a hiliarous scene I am sure. One overly pregnant soccer coach begging for kids to come play. Hopefully I am not the crazy soccer coach who has scarred this kids for LIFE : ) They are just 3, right? So they will do... or not do whatever they want whenever they want. Even the coach of the other team came up to me during the game and asked "Do they normally do this... just run off the field"... My response, "Oh yeah, this is very normal for us" : ) Oh well... I hope there is some fun being had by these kids. Maybe they won't look at their first soccer trophy and think man we lost every game - like I do when I see my YMCA Blackberries trophy. I was 5 then and we did lose EVERY SINGLE GAME... There's hope though. I totally stuck soccer out for the long haul despite the epic season of the Blackberries. The Blackberries? And you thought the Caterpillars was a silly mascot! 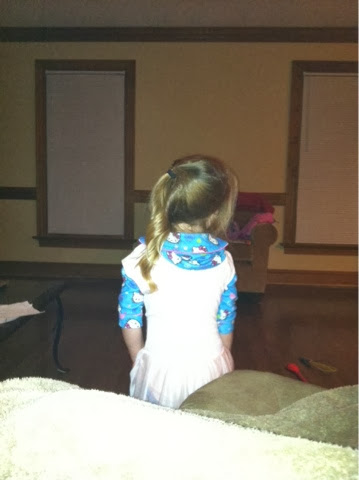 This is E last night... Pink tutu... Hello Kitty pajamas... swim class with her animals in her room. Now let's discuss what matches my dear child. I did not need to take any pics of her room because... well she had done something similar a few night before.

So around 8 we go down the hall to check on the girls and this is light shining from the crack of the door. Not a surprise but the nightlight USUALLY does not give off that much light. Open the door to this. Big overhead light on. Animals lining the room. Blankets spread out. R fast asleep. Supposedly E was 'organizing' her animals... Okay great... but you may not turn on the big light because that might wake up R. 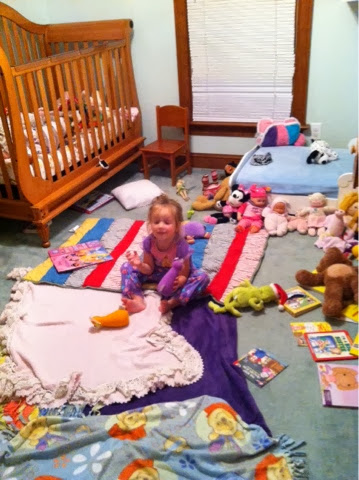 If you look hard enough you can see R is in the crib most definitely... asleep 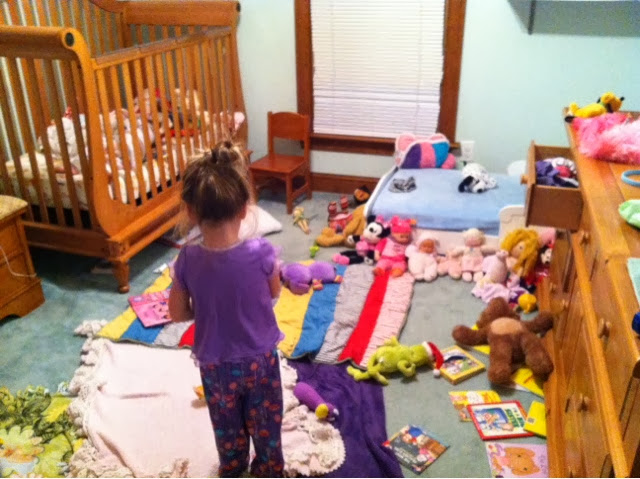 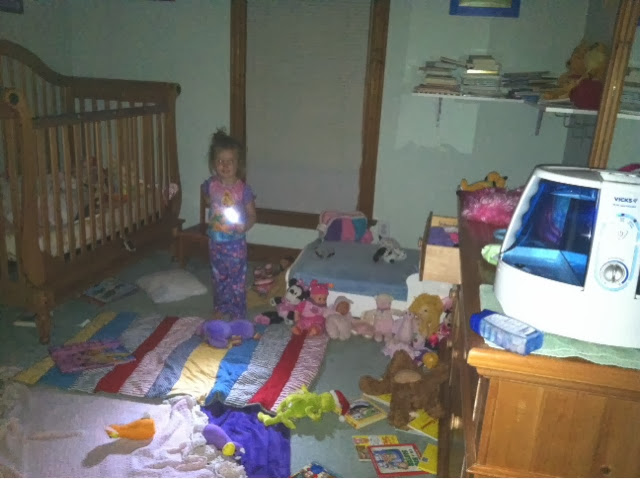 And that was the problem last night when she was out in her tutu... She could not find it and was FREAKING out about it. Fortunately we convinced her to use Papa's 'dirty-ish' blue one 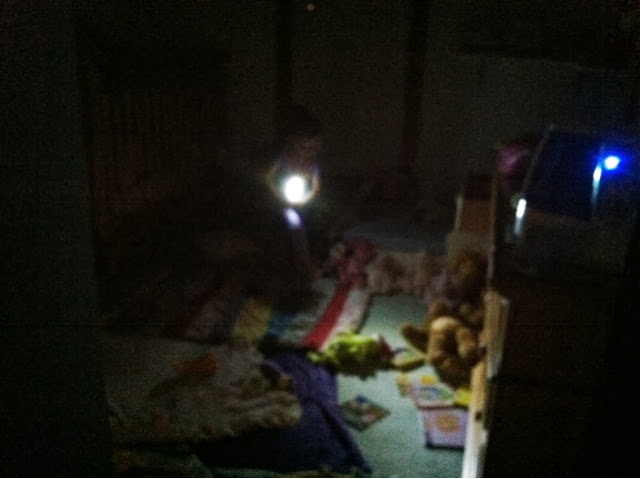 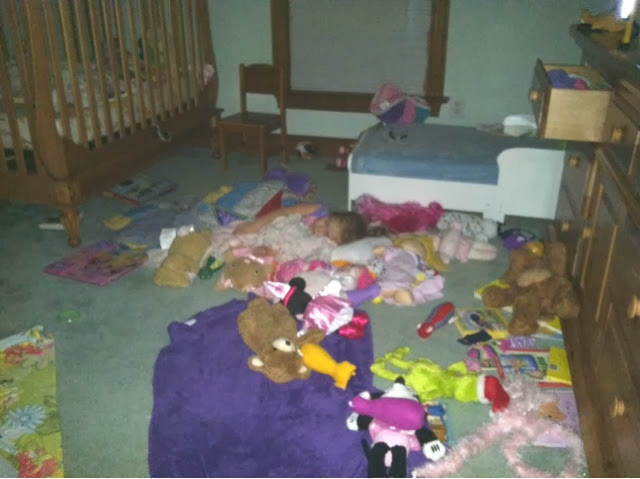 Hey as long as R does not wake up I really have no problems with pre-bedtime organizing/playing/whatever-ing as long as it is QUIET!

In case you missed my September update, here's a G-E-M from the beach that I totally forgot about...

E- What are you doing?

And Uncle Kevin had his iPad at the beach and instead of being clobbered by E CONSTANTLY... He download this free drawing app... Here are a few of the more telling pics of the week. 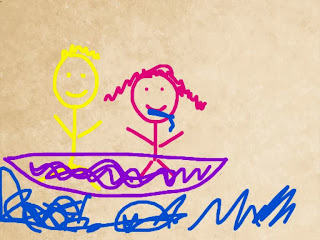 Uncle Kevin and E on the boat 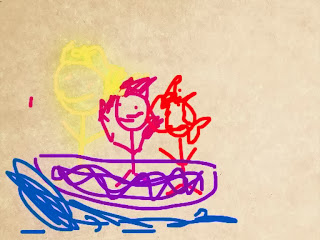 Uncle Kev, E and R on the boat except E was responsible the water, hair and faces.