Five Favs - From over the Weekend

We are going to a wedding this weekend so we broke the news to E - who cannot stop talking about it. This is what constitutes a wedding to a 3 yr old:

E had another round of swim class Saturday. She was not super thrilled about it but then I told her she could have a piece of chocolate if she was a 'brave swimmer'. Yep... I'm a briber. So it was totally fine. She did great. Only thing she did not like was playing London Bridge at the end with the noodles but other than that it was really good - oh and the older lady teacher was not there which was a bummer - so it was slightly disorganized ANYWAYS... 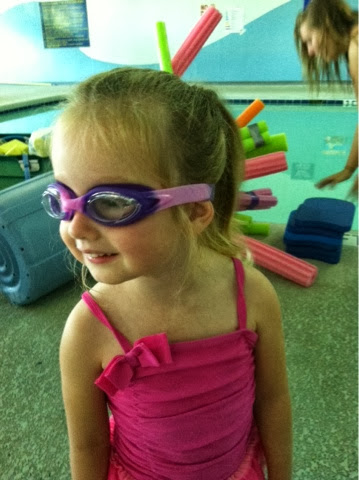 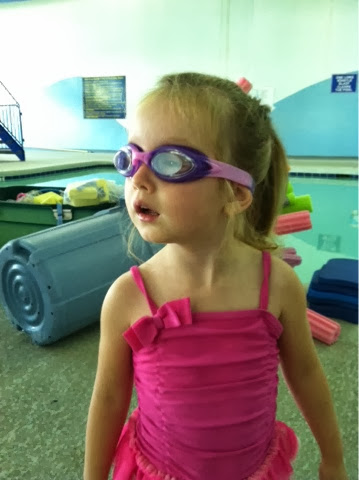 Saturday night (while I'm homework supply shopping) E is popping in and out of her room and she is having this MASSIVE meltdown about how she does not want to go to swim class ANYMORE! And she cannot do two things (soccer and swimming) and the works. Oh the mind of a 3 yr old.

Please note, the one activity rule was activated when E wanted to do soccer and ballet. So now how do I convince her that she gets to pick one thing and I get to pick one thing? Swimming is a must until she (and all other kids can swim the length of the pool : )

Let's just say Sunday was a great behavior day at church. Very low-stress compared to others. I told Lee it is the calm before the storm... the storm of baby #3. Anyhow, three amusing items of interest:

1. During the homily R was not being a crazy child. She sat with me for a few minutes and Lee for a for minutes and then decided it would be a good idea to get down and start licking my skirt? I was dying. Another mom saw me and her and was getting a good laugh. So finally she would not stop licking me and I could not stop my quiet laughter and so I picked her up and R proceeded to start licking my face, which only caused me to start quietly laughing harder. Weird...

2. Following the licking episode E made it known to us (and half the church) she needed to blow her nose. So she went to the bathroom and came back with a Kleenex and started blowing her nose - really loudly. So we go to a really small church so EVERYONE could hear her. Finally after the fifth time of Lee telling her that was enough she stopped, took the Kleenex to the trash, washed her hands and came back - totally thinking nothing of it.

3. During the coffee hour after Liturgy, I asked Lee for a bite of his bagel and cream cheese. He willingly but not-happily forked over the bagel. I took a bite.

"You take the biggest bites Chicky!"

{Hastily grabs the donut on the plate next to him. Me with mouth full of bagel trying to stop him}

Lee - There; that's fair
Me - {Holding back my laughter and tears!} That's not my donut. Its Deacon Stephen's
Lee - {Laughter}

So E has been racking up things that she 'needs' for her 4th bday (not until May) so I decided to start keeping a running tab of good CHRISTMAS ideas that she would like. So here we go:

1. Princess scooter - Did a little digging on this and they are 50% off at Target this week online so I HATE to admit that I have already started Christmas shopping but I have. I could not pass up the $20 scooter
2. Skates - No idea why E thinks she needs/wants roller skates but whatever
3. Stars Pajamas - Again this is a random one that will probably be forgotten about and princess pajamas will take their place.

I have some thoughts/ideas on Christmas so I'll have to do a post on that. Basically along the lines of - is it fair to ask people to limit what they give your child for Christmas? I vote yes BUT how do you do this tactfully and not offend anyone?

We desperately needed an activity for Saturday so we would not be at Camp Jibbe all day. So Spring Hope has this Pumpkin festival and parade and we packed up and headed out. We steaked out a spot for parade viewing along the parade route and headed into the 'festival' part. It was mostly craft vendors and food and a stage. Here's the thing... It is called the Spring Hope Pumpkin Festival... I promise you I counted in the single digits of real pumpkins... Confused? YES!

Anyhow, we made the loop a few times, got food, and then made the loop 1000000 more times before the parade started. Someone was selling bubble guns that I thought would be a good distraction for the girls - but by the time Lee went to go get one... gone. : ( Also there was this super cute garden flag with a a squirrel on it that stated "Welcome to the Nut House" TOTALLY up our alley - but it was gone too : ( On a : ) note our favorite Sno-Ball vendor was there (not like at the 4th of July parade). E requested a pink one... Only pink option - Pink Lemonade - but she ate/drank/enjoyed the whole thing. R happily bounced between my Blue Raspberry and Papa's Cherry.

Then it was parade time!!! Again... total lack of pumpkins? All the HS bands were there. The Shriners were out in full force with the little bity cars which was nice and lots of fire trucks. The kids were most interested in the candy and E being one of the smaller kids was at a disadvantage for trying to get the candy - but the bigger kids always passed her a few pieces  - and we even convinced E that she needed to give a piece to a little boy who was smaller than her - she hesitated but proudly compiled. There is hope you know! 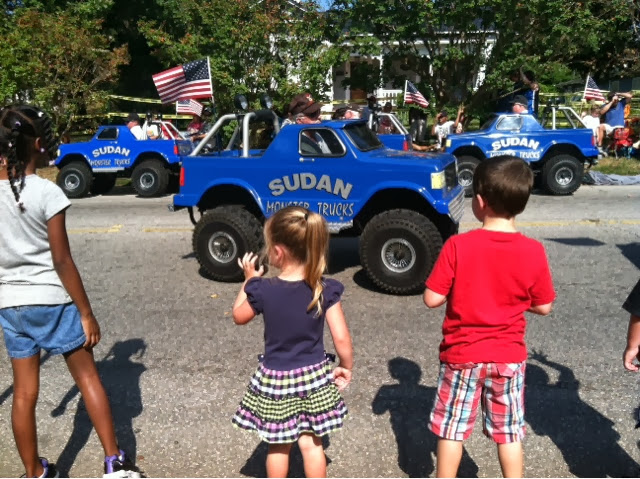 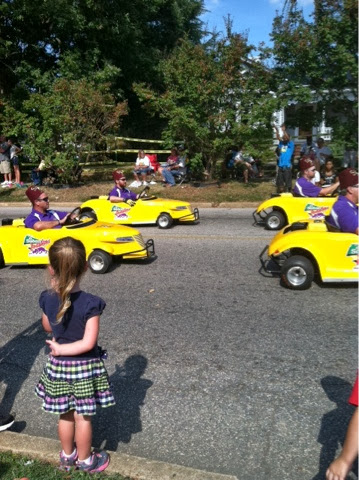 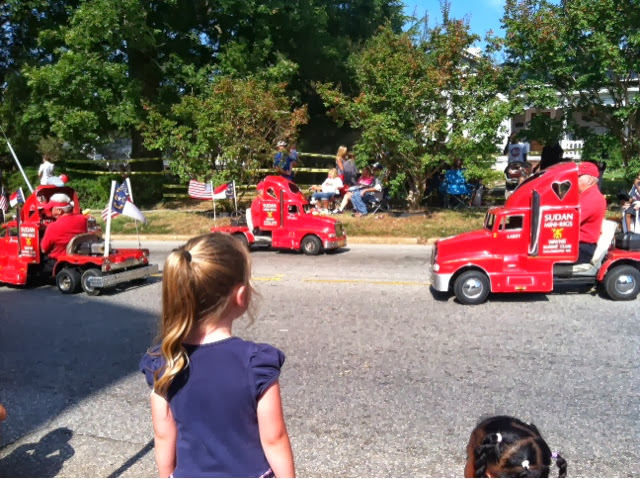 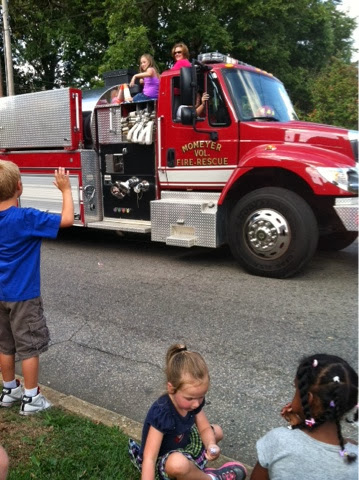