My Past Meets My Present... On Sesame Street of course!!! 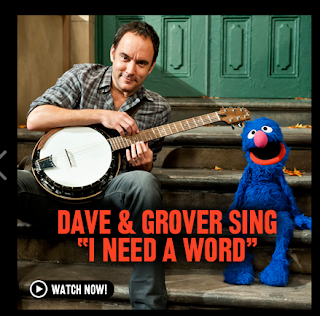 1. Care if Sesame Street DVRs correctly
2. Watch an episode the same day it airs
3. Be super excited to watch Sesame Street
4. Demand silence during an episode

Backstory - I was a huge DMB fan back before kids were in the pic. I could sing you the all songs to their first 5 or 6 albums. I sat front row at a concert. I used to be really hardcore. But then kids came and they kind filled up a good chunk of my time and music listening space. I thought about going to a DMB concert in Raleigh-world the last time they were here - which was NOT this year I believe - and it was an an indoor arena and that just seemed weird. Maybe Sesame Street {gasp} will inspiring my old self to download the new album for my .5 marathon training.