Let's forget about crisis E had over the destruction of the princess puzzle AND the crisis over her umbrella being put on probation from this morning. This afternoon is SO much more interesting. E decided to not nap during her rest time and R greeted me with the fragrant aroma of a stinky diaper 25 minutes before rest was over.

Rest was declared over earlier than intended. I still had work emails to send so this is what I was greeted by: 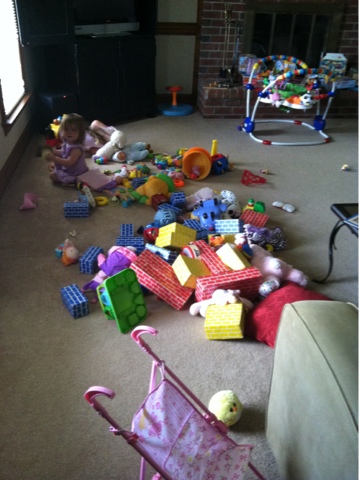 No problem... so long as it is put away. Except after asking and multiple warnings, 95% of the toys won't be seen for a week. I will not beg... Its not my style so instead there are consequences for inactions.


E was way mad. R didn't seem to mind. On to the next thing. The walk was relatively uneventful. I remain perplexed as to why the September edition of High Five arrives in July but that was the least of my problems.

I got the sprinkler going in the back - in grass - again another crisis that really nominal comparatively. Since you are dying to know the backstory, Papa would not allow the sprinkler on the driveway yesterday which was a MAJOR point of controversy and ultimately you can guess who won - the person whose age is NOT in the single digits.

Sandboxes open. Race inside to get the burrito stuffing on the stove and tomato and lettuce chopped BECAUSE I realize our demise is eminent since naps were less than good. The girls were very well occupied between the empty bubble bottles, sandboxes, sprinkler (E only), shouting at Lukie-Luke (the dog next door), and chalk which E dragged out of the garage to color on the back patio.

I helicoptered around the windows and doors trying to keep an eye on what was going on. I knew the end was near after I caught R consuming hunks of chalk. Reprimand by trying to get as much chalk out as possible... made easier by R's screams of protest. Run back inside. Burrito stuffing not burning... Excellent. R consuming more chalk. Remove chalk bits. Huddle her over to E and the sandboxes. Run back inside and get cheese and sour cream and salsa out. Girls in blind spot so I cannot see anything from either window or door. 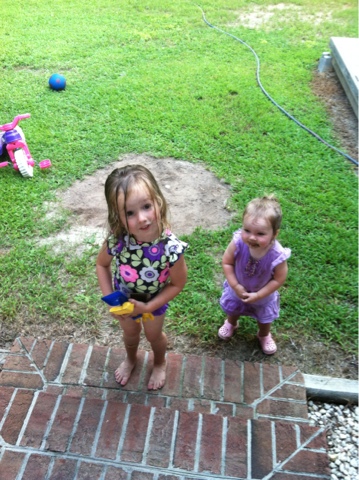 Find them playing in the dirt spot where a sandbox was. Shovels and all. E said they were in "flower class". R must have been way hungry... 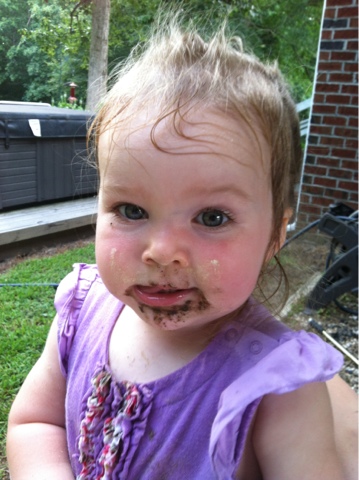 Because chalk and dirt make a perfect combo! {I promise I am a good mom!} 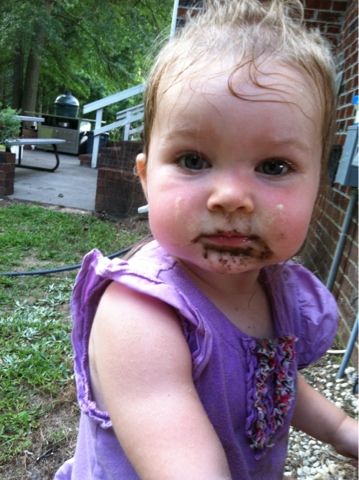 With that non-food consumption going on, outside time was whistled over. We were running a mere 30 minutes ahead of normal dinner time schedule.  I was way on top of things! I even had the clothes I was bleaching out of the laundry room sink so hands and feet washed and cleaned {enough}.

E was overly excited about 'burritas' and sour cream. Expiration on the sour cream was errrr... today. So stirred it up and bam. Did not taste great but its sour cream so what should it taste like? Not willing to run the risk of expired dairy... again so X'ed that one. E was not totally heartbroken. R ate the filling (Nani's recipe} and E devoured a whole burrita. As I was up and down, up and down. I noticed this thing that was out of place in the backyard.


I have a mild freak out session. Hello my girls were playing out there less than 10 minutes ago!?!?!?! Call Lee who is on is way home. Okay who's next on the chopping block to get a call. The boys papa up the street? Negative straight to voicemail.

NANI! Mi vecina! Well actually her hubby! {So glad we moved to be a stones throw from their house - well maybe not that close but its not a 25 minute ride!} 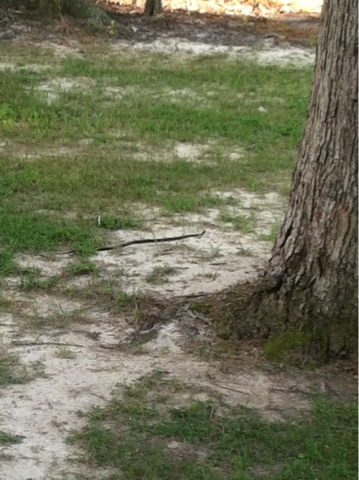 The snake made good forward progress as I waited for my snake chopper. I kept the girls occupied at the table with cantaloupe and figs. I had to keep my eye on the thing! E kept on asking where the snake was and if it was the bird and a bunch of other stuff... But I was slightly preoccupied.

The guys finally showed up and declared that it was 'just a bitty thing'. Hmm.... let's discuss just how NOT bitty that snake was. Lee showed up to join the snake killing party.

Can we discuss how violated I feel by this snake's presence in my backyard? Okay no because its on to bath and shower. Get R in tub. E and Papa come back inside after seeing our snake killers off. Check on R who has settled into the tub and toys.

Rush to get E in the shower before Papa but not without her commentary on R's bath.

Turn corner to bathroom... Note that dirt does not normally smell like that. FANTASTIC!

Does chalk and dirt contain some sort of insta-laxative? {No time to ponder such things}

Grab R. Shout for reinforcements. Get our shower going - yes another traumatic shower experience for the girl - second in a week. Rinse her off. Get soap going. E refuses to get in shower. Repeatedly asks about the situation going on in the kids bathroom. I assure her it was jut an accident amidst R's shrieks. Rush the clean R out of the shower and get her Elmo. Silence. Diaper on. PJs on. E in shower. Second set of PJs on.

All before R really realized that Elmo had been swiped and put back in her arms.

Prayers. Bed for one. Puzzle for the other. Bed again. Hair tie color not right. Potty. Hitting hand on wall on way back to room. Demands for snuggles. Cannot reason with an overtired 3 yr old.

Email ThisBlogThis!Share to TwitterShare to FacebookShare to Pinterest
Labels: outside with the kiddos, papi

How to Kick off summer right - Lot of Sun, Sugar, & Water 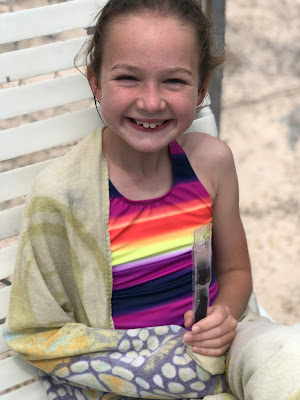