Remember how E was obsessing over ballet camp? Yeah, me too. Well she was all about it until 5 minutes into camp. PS - There was only one other little girl there - whose mom happened to be in our Lamaze class - yeah that was awhile ago.

So E clammed up for about 15 minutes because she could not see me - there is a looking window so I was watching all this play out. She was teary-eyed and one of the teachers tried to get her to stand on the X or do the step but E would have NONE of it.

I was going to go in and have a chat with her but this helicopter mom did not go in until summoned - so I felt less helicopter-mom-ish : ) 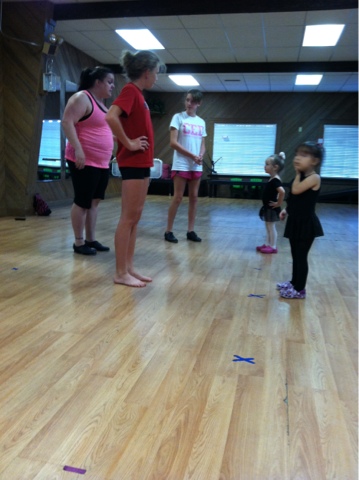 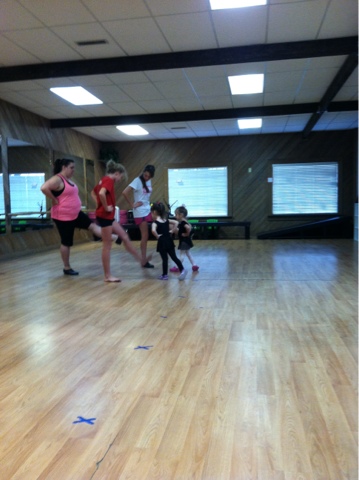 She was totally fine once I was in there - with R and the other mom. They were super cute. Both girls finished great.

I told E in the car that she had camp again tomorrow which she was not particularly thrilled about... so we will finish out this camp but who knows if we'll be dancing in the fall. I think she'll feel a bit more comfortable tomorrow and I'll show her the window that I can see her through. - Not trying to start anything that will cause controversy trying to break.

Maybe she was out of her zone. Maybe she really doesn't enjoy it. Maybe she wanted to get home and play on the playset. I really don't have a clue.

What I do know is I am not going to beg her to do dance in the fall because it is far too expensive.. Seriously probably $55 a month. She has best like something that is $55 a month! Heck soccer was $30 - and don't think I have not looked, but fall soccer is $40 FOR THE SEASON.

So in conclusion, E will finish out the week at ballet camp even if I have to beg/make her go. Option will remain open until I have to pay for the first class in September... Will support whatever activity but honestly won't be sorely disappointed if ballet lasts a week.

Email ThisBlogThis!Share to TwitterShare to FacebookShare to Pinterest
Labels: Ballet