So I got the hankering for an ice party from Margaret when I saw her pics the other day. 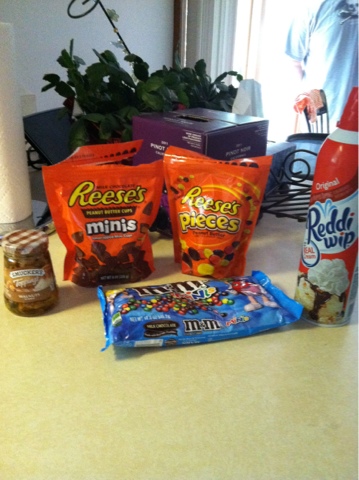 After Lee's work appointment this morning he graciously patronized Wally's so I would not have to. Reese's shell was on the list - he had no idea what that is so he got two Reese's items that were not Reese's shell. Those Reese's minis are pretty horrible and I would not recommend them to anyone fantastic and there maybe be some left tomorrow.

Since we were graced with Papa's presence for most of the day - and there were not a zillion things to do and he was not working - he ordered a family activity. He originally voted for Pullen Park - its an hour away in Raleigh-world and Hurricane Kibbe crashed into Grammy and Grandpa Joe's last weekend + Grammy was on girl duty on Monday, that option was slashed. Not driving to and from Raleigh Saturday and Sunday, now.

My vote was Jibbe's pool + grill out. I was not married to the idea and Papa wanted to go to a park so he vetoed the pool - shocker - and RMT Spray Park it was. Now what do you get when you have a Spray Park date + an ice cream party... well let me tell you.

Me - You need to eat your taco meat for lunch
E - I don't like it
Me - Well don't eat it, but you cannot come to our ice cream party after dinner
E - Mama! {meat consumed}

Me - You made a massive mess of your taco meat under your chair
E - {grin}
Me - Please clean it up and wash your hands and go take a rest
E - Mama! I don't want to
Me - If you want to go to the spray park you will do it
E - {15 minutes later and most of the larger pieces cleaned up... silence} 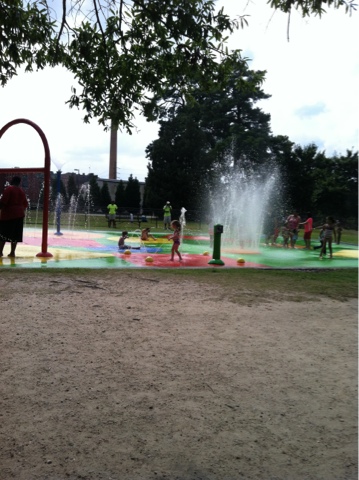 We really don't do park trips or planned out ice cream parties and in the same day... unheard of.  But the girls were troopers this morning. I vacuumed and did laundry and walked for about 2.5 miles!!! Papa got the grass mowed because he is trying to win the neighborhood - "Who has the most manicured grass award" : ) 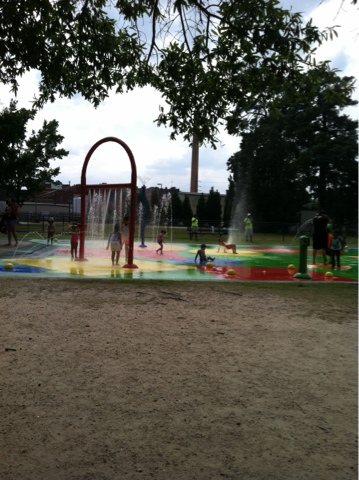 We got to the spray park and Papa and the girls rode the train. R was way mad. E was more interested in the spray park. They also up-ed the admission to the train to $2 which is a total scam and spray park is a nominal $3. Seriously $2 for the train? I think Pullen is still $1 and the ride is nicer and the train is way cooler but don't tell Papa and E that! 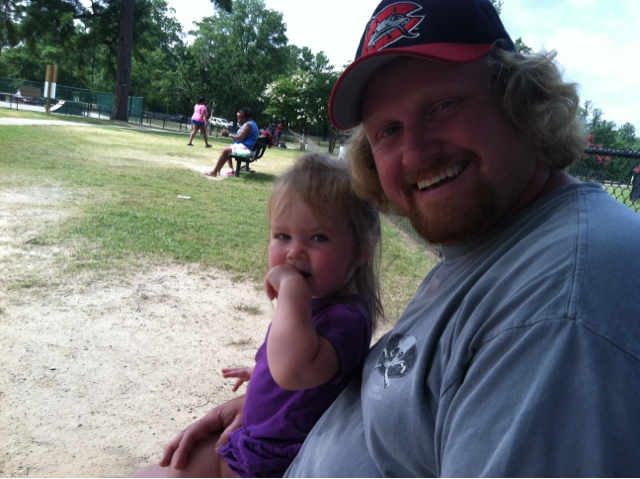 R sat the spray park out because she hates spraying water. Yesterday E lured her into the sprinkler and R got way mad and pitched a fit. E was not getting into the spray and I was kind of getting perturbed but said situation. We made the effort to get out of the house... now you need to take advantage. I was thinking I totally should have VETOED the Jibbe pool idea but then she finally got in  - 7 minutes before we had to leave. R was again way mad and shouted "cup, cup, cup and nack nack nack" for a good portion of the spray park time.... Whoops! 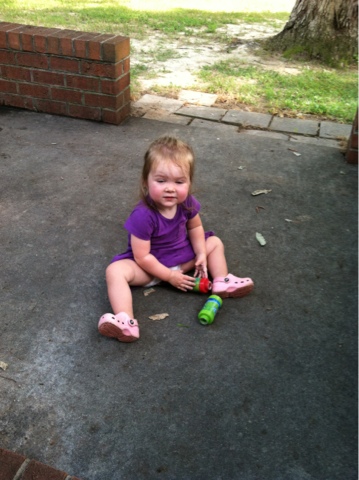 Lee cooked bbq chicken and corn and cabbage on the grill. The girls successfully managed to dump not one, or two or three BUT FOUR bottles of bubbles in the span of 5 minutes. I am still not sure how E managed to open them. I am pretty sure our house has been drained of its bubble supply. R still had a good time with the wand, meticulously standing up each empty bottle, putting the wand in, taking it out and blowing on it/dragging it on the ground/licking it. 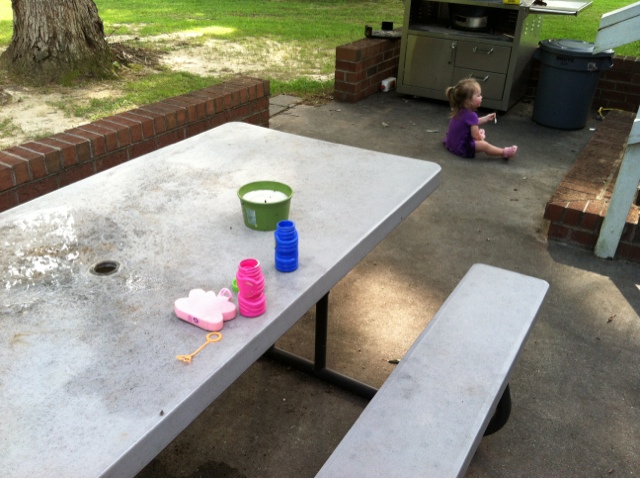 We hit up the swingset after said parties realized there was no bubble juice left. Why is it that the first thing E does while swinging - after demanding to be pushed - is go into a Alleluia interlude? Whatever? Jibbe came over and I was able to sneak inside and get out of the heat. Everyone else was comfortable but I have been hot all day.

R faded quickly and she could not make it to our ice cream party : ( In fact it was bath night and it was late so she got a shower - which she HATED. Remember she does not like spraying water? Hopefully she'll enjoy the spray park by the time she's 15. She screamed the ENTIRE 90 seconds the shower took. As soon as she was out she treated me to a liquid present... and I totally deserved it. 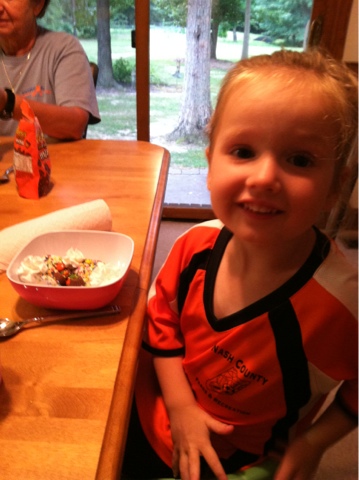 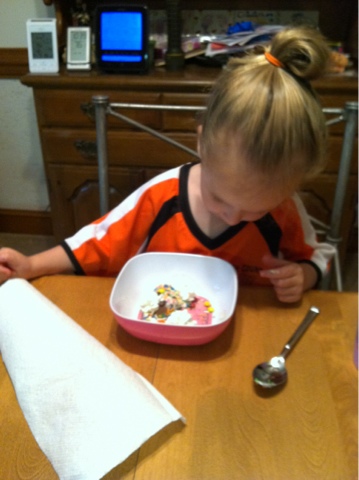 E put everything except wet walnuts. See I have taught her something!

Jibbe convinced him to sit with us and not be anti-social in his my recliner. 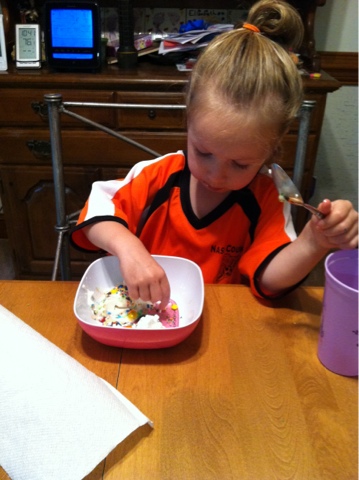 Overall we got alot of stuff done today and everyone is going to bed on a sugar high. I think we need to institute monthly family ice cream parties.
at July 27, 2013 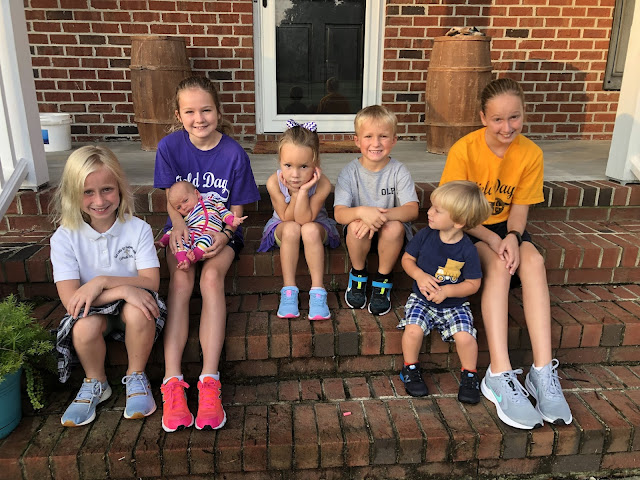